In computational complexity theory problems are classified into classes according to the algorithmic complexity for solving them. Confusion often arises due to the fact that naming of these classes are not intuitive, and even misleading. For instance, many consider that the complexity class “NP” stands for “non-polynomial time” when it actually stands for “non-deterministic polynomial time”. Another common misconception is that problems that are elements of the “NP-hard” class are also elements of “NP”, which is not necessarily true.

The following table summarizes the most important complexity classes and their properties according to the current understanding in the field:

Each column lays down the pre-requisites a problem ought to fulfil for being considered a member of that complexity class. Notice that, trivially, all elements of “P” are also elements of “NP”, however the inverse cannot be alleged (at least while the P versus NP problem remains a major unsolved problem in computer science).

The next sections provide more details on these properties.

Defines decision problems that can be solved by a deterministic Turing machine (DTM) using a polynomial amount of computation time, i.e., its running time is upper bounded by a polynomial expression in the size of the input for the algorithm. Using Big-O notation this time complexity is defined as O(n ^ k), where n is the size of the input and k a constant coefficient.

To put it briefly, a DTM executes algorithms the same way our modern computers do. It follows a set of pre-defined instructions (program), executing one instruction at a time, changing state and resolving the next instruction. We can imagine that at any given point in time there will be a history of executed operations and a set of predictable operations to follow based solely on the machine’s current state:

As long as there’s no external stimulus (randomness) involved, systems of this kind are deterministic, always producing the same output from a given initial state.

Defines decision problems for which a given solution can be verified by a DTM using a polynomial amount of computation time, even though obtaining the correct solution may require higher amounts of time.

There’s a straightforward brute force search approach for solving this kind of problems:

Here we introduce the non-deterministic Turing machine (NTM), a theoretical computer that can take this naive algorithm and run it in a polynomial amount of time: 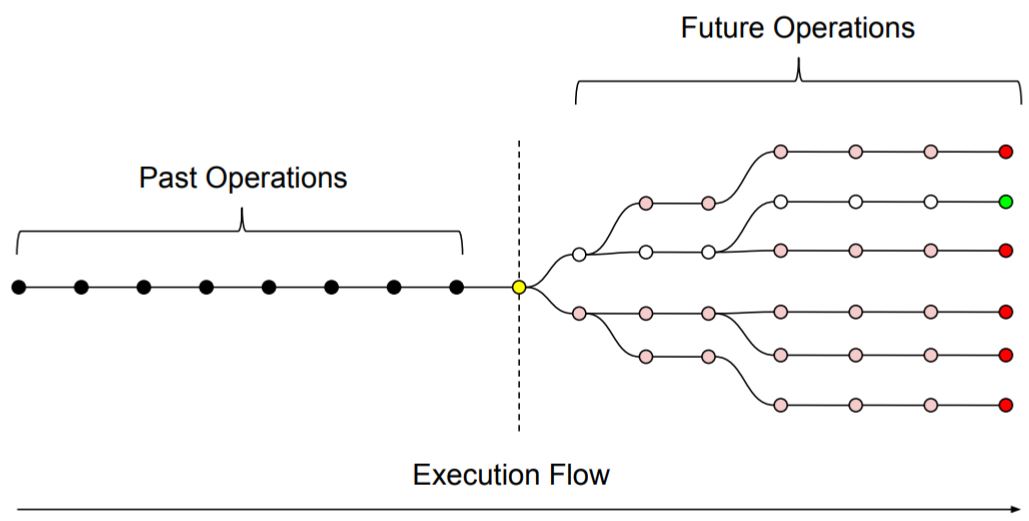 As figure 2 exemplifies, the NTM, by design, can be thought as capable of resolving multiple instructions simultaneously, branching into several execution flows, each one of them verifying a different solution to the decision problem, until one of them finds the correct one, halting the NTM.

NTMs only exist in theory, and it’s easy to understand why: Their capability for branching indefinitely into simultaneous execution flows would require an indefinitely large amount of physical resources.

Hence, we are effectively reducing the NP-problem into the NP-hard problem for solving it. Intuitively problems that allow this are at least as hard as the hardest NP problem, otherwise they couldn’t be used to solve any NP problem.

As a consequence, if we were to find a polynomial time algorithm for solving a NP-hard problem (which is unlikely), then we could use it to solve any NP problem in polynomial time as well, implying that P = NP and solving the P versus NP problem.

For this demonstration we will use two well-known NP-complete problems:

First, consider the following solver for the knapsack problem in its decision form:

This solver will answer whether or not it’s possible to achieve a value combining the available items without exceeding the knapsack weight capacity, returning true in case it’s possible, false otherwise.

The Item data structure is presented below:

Now, we want to implement a solver for the partition problem that answers whether or not a given multiset can be partitioned:

In order to do that we evaluate both problems objectives, translate the partition problem input accordingly, and feed it into the knapsack problem solver:

If you found that fun, I suggest you try to reduce another NP problem to the knapsack problem. You’ll find out that each problem needs a slightly different approach, sometimes recurring to heuristics to make it work.

In the demonstration at the end of the article you may have noticed that I didn’t provide an actual implementation for solving the knapsack problem, however you can find one at the linked Wikipedia page, or in one of my GitHub repositories: https://github.com/TCGV/Knapsack

This is my take on the topic of complexity classes of problems, which I find of major importance for becoming a more effective, skillful software developer, giving us the tools for better analyzing and solving technical challenges. I hope you enjoyed it!